The Danger with Innovation Friction

There’s a lot to be learned about innovation by looking at good ideas that just didn’t make it.

There’s a lot to be learned about innovation by looking at good ideas that just didn’t make it. We’d all like to believe that if we have an idea that genuinely improves upon something, and if we execute that idea correctly, the idea will be successful. But there is another factor to consider: 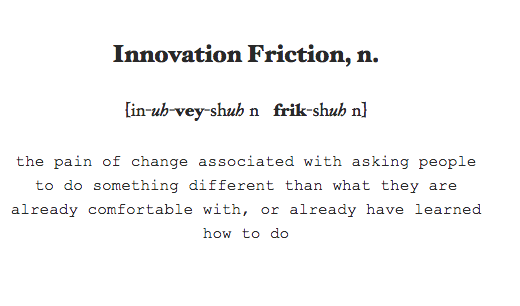 Back in the early 2000’s, I was running part of the eCommerce practice for Ernst & Young. Around 2003 we moved into a shiny new building at 5 Times Square in New York City, right next to where the ball drops on New Year's Eve. The building was the first place I had ever seen with a keypad-controlled elevator. Instead of pushing an up or down button, the elevator is called by a numerical pad. You type in the number of the floor you are going to and receive a response from the keypad with a letter (such as D.) That letter corresponds to the elevator that you have been assigned to. You go to “your” elevator and, when it arrives, it automatically takes you to your floor.

This innovation delivers several benefits that improve the elevator experience:

1) It makes the elevators more efficient.

In a traditional system, an elevator user has to “call” the elevator and indicate their desire to go up or down. Once in the elevator, the user has to pick a floor. The old system was not a massive amount of effort, but the new system reduces two interactions to one. Presumably an improvement.

(Plus there’s no worrying about the kid in the elevator who decides to push all the buttons — there aren’t any!)

Is there a downside to this innovation? Well, if you’re already in the elevator, there’s no opportunity to change your mind without getting off on the wrong floor and repeating the whole process. The biggest downside of this innovation is simply that it requires users to learn something new. In fact, when I moved into 5 Times Square, I found that when people came to meet with me for the first time, the first 10 minutes of our meeting was inevitably focused on their need to vent their reactions to our crazy elevators and how they couldn’t figure out how to use them!

Truthfully, the elevators were easy to use. Clear instructions were printed above the keypad, and the system worked very well. The problem was that it required users to relearn a skill they had fully and completely mastered (i.e., using an elevator) and start over at a beginner level — even if it only took 30 seconds to learn how to use the new elevator system.

I’ve watched with interest over the years to see if these types of elevators would take off. It turns out they didn’t. Very recently, I was visiting a client in Houston. The building had actually spent money to remove the keypad system and replace it with the traditional 2-step process. Wow. You know your innovation is not doing well when your customers are willing to invest tens of thousands of dollars to get rid of it and go back to the old way.

After much thought, I believe it’s all because of the friction of asking people to re-learn how to push an elevator button. Some innovations don’t require this. The new Boeing 787s have substantial innovation, but from a passenger standpoint, they work in basically the same way as the last round of airplanes. The innovations improve comfort, fuel efficiency, and other factors, but you recline the seat and return your tray table to an upright position in pretty much the same old way. Other innovations require learning: ATMs, DVRs, electric cars. All of these innovations have been successful, despite their learning requirements. However, the need for users to learn new behavior did slow their adoption. Innovation friction slows down adoption of innovations that require substantial behavior change, and even more so if it requires learning. This is especially true if the innovation requires un-learning an old way of doing something. If the friction is greater than the momentum of the benefit of overcoming it, the innovation stops dead in its tracks.

An example of this friction is the metric system, which has made only a very small amount of progress in adoption over the last 50 years, despite being clearly superior to the “English system.” It’s just too darn much trouble to change.

One last story about innovation friction from early in my career. At that time, I was working with a lot of insurance companies creating web-based interfaces to replace traditional “green screen” systems used by insurance agents to quote and initiate new policies for auto and home insurance. It typically took a new hire 4-5 months to learn the system well enough to complete a policy quote — and well over a year to become truly proficient with it! We proudly designed replacement systems that anyone with basic computer skills could learn in a day or two at most, but found that some users were quite hostile to our efforts. They already knew how to use the green screen systems, and they were pretty darn fast with them. One Customer Support Agent even quoted Charlton Heston to me, saying I would only be able to take away her green screen if I pried it from her “cold dead hands.” Creepy? Yes. But also telling. Those old systems are gone now, because of the huge benefit of being able to train people on the new system so quickly. This benefit put the companies that used the new system in a position to more or less force that innovation onto other users.

Many successful innovations have required change and learning — automobiles, indoor toilets, smartphones. With all of these examples, we’ve seen many people willing to learn, for whom the “pain” of change was outweighed by the perceived benefit. But we also see a substantial number of users who resisted for years, saying, “No thanks, I like my outhouse (or horse and buggy or bank teller) just fine.” When conceiving or launching an innovation that requires learning, it’s important to consider the role innovation friction will play in adoption, where you can reduce it, and where you can increase the user’s willingness to accept it as the cost of the greater benefit.